This Lake Weiss Fishing Report Made Possible With These Great Sponsors:

Contact Tim for Electronics Installation, Updates, Modifications or Training! You can't catch what you can't see and there is no reason to fish where there are no fish! Tim has years of experience installing and calibrating down scan, side scan, structure scan and LiveScope units. Your electronics is the key to finding and catching more crappie.

With all of the rain and swift current on the main channels at Weiss Lake you can still put together a nice bag of fish when you find them. In some coves you can find crappie stacked up just out of the current and in coves on creek channels in 10 to 18 ft of water. You can look for groups of fish on structure with Livescope and casting a crappie jig (such as a Red Rooster Jig or Pop's Jig) or single pole with the length that you mostly feel comfortable with (I use a 14ft Pro SE Outlaw Crappie Pole for single poling). You can also be successful longlining or spider rigging in coves and creek channels. For Longlining I would start with a 1/24 jig head and add a #7 split shot if see fish deeper in the water column than 6ft.

Good Luck and if you want to learn more about crappie fishing Lake Weiss this time of year, give me a call and we can schedule a trip!

This Lake Weiss Fishing Report Made Possible With These Great Sponsors:

Contact Tim for Electronics Installation, Updates, Modifications or Training! You can't catch what you can't see and there is no reason to fish where there are no fish! Tim has years of experience installing and calibrating down scan, side scan, structure scan and LiveScope units. Your electronics is the key to finding and catching more crappie.

The crappie fishing on Weiss lake is getting better and better! Water temps are in the mid to upper 40s and the crappie can be found roaming creek and river channels.

You should be able to catch crappie long line trolling, casting, shooting docks or spider rigging. I've been catching my better fish jigging or spider rigging main river channels but if you want to cover water and catch fish at the same time you can be pretty successful long line trolling with Red Rooster Crappie jigs in certain areas of the lake where they are schooling and chasing shad. I have been using the Red Rooster Georgia Razor in the Blue Glimmer an Hammer Time (MC Hammer) colors.

Good Luck and if you want to learn more about crappie fishing Lake Weiss this time of year, give me a call and we can schedule a trip!

It has been different fishing on Weiss lake this fall with the winter drawdown changing to 3ft from now on instead of 6ft.

Crappie are on river and creek channels as normal but holding tight to stumps and brush and not roaming on channel ledges like they normally are this time of year.

Winter drawdown started a month later also. The lake is only down a little over 1ft when normally it's down 2.5 ft or more. Combine that with very little current the last month or more which means less dissolved oxygen. All the dams on the Coosa river were upgraded to supply dissolved oxygen during times when the dams are not generating power.

Weiss Lake did not benefit from this because the dam above Weiss is owned by the Corp of Engineers and wasn't required to do the upgrade.

The crappie are there but we have been fighting the Fall winds as well!. You have to be patient and move slow.

Hope this helps those that are struggling. It's not just you. There's good days ahead. I have started booking for February and March. I have some dates open the last half of November and several open days in December.

Winning tournament angler and successful guide Tim Pentecost targets crappie on Weiss Lake from mid-October through the end of December using two patterns. One is on the main river channel, and the other is along the shoreline.

Of the two patterns, the main river channel pattern produces the biggest crappie.

“We catch a lot of big fish on the main river channel,” said Pentecost. “The crappie range in size from 10 inches to 1½ pounds. Last year, we competed in a tournament with a 30-fish limit. Our bag weighed 31 pounds and some were two pounders.”

While this pattern usually begins in mid-October, Pentecost says the key is water temperature. As the water cools, shad and crappie migrate from the flats to the main river channel. It’s possible to find fish on the submerged channel in September, but the migration is not complete until the water temperature falls below 70 degrees.

He continued, “Some days fishing is slow, but there are days when you cannot keep your lines in the water. On days like that, you have to hit spot lock on the trolling motor, remove all the fish from your lines, then reset your rods and start again.”

To find crappie, Pentecost concentrates on fishing mid-lake between Yellow Creek and Bay Springs. He avoids areas on the main river channel with a steep drop off.

“Steep drop-offs do not produce as well as places where the submerged river bank slopes into the channel. A gradual slope has more cover and steps. Small stumps that you can barely see with LiveScope will hold two or three fish.”

Once on a promising stretch of river channel, Pentecost’s hunt for crappie involves pushing bottom-bouncing double minnow rigs with six spider rigged rods. The technique is also known as tight lining, and the terminal gear as a drop shot. His rig has a ¾-ounce bell sinker at the end of the line with a 6-inch leader attached 12 to 15 inches above the sinker. A second 6 inch leader is attached 12 to 15 inches above the bottom leader. Both leaders sport No. 2 hooks. All lines are 10-pound K9 Hi-Vis Fluoro, and the rigs are fished on 16-foot Pro SE Outlaw Crappie Poles with Outlaw spinning reels.

Pentecost’s double minnow rig is effective for two reasons. It allows him to stay in contact with the bottom and fish two different depths at the same time.

“Most of the time during the day,” he said, “crappie sit in the mud on the bottom. You cannot see them, not even with LiveScope. Sometimes when we catch them, the scales on their bellies are stained or dirty. I prefer to find crappie on the bottom. Most anglers will not fish deep, so it’s a great pattern when guiding or when fishing a tournament."

“Start fishing 15 feet deep. Sometimes the fish will be as deep as 30 feet, but most of the time, you will find them about 15 feet deep. I never troll any faster than .3 mph. And I troll against the current to better control my speed.”

“Anglers catch crappie off docks year round on Weiss,” says Pentecost. “In the fall, there are always plenty of crappie on the docks. The average fish is smaller than the ones we catch on the main river channel, but occasionally you will catch a fish weighing 1½ pounds.”

During fall, Pentecost targets docks at the mouths of coves.

“The docks on the main lake are good,” he said, “but the ones at the mouth of coves just off the main lake hold more fish. Look for docks in water at least 10 feet deep with cover. Dock owners on Weiss sink a lot of cover around their docks.”

Pentecost scans the docks with LiveScope. The forward facing sonar reveals if a dock holds fish, their size, location and depth on the dock. “LiveScope took the hunt out of finding crappie on docks,” he said.

Without live sonar, Pentecost shoots his jig as far as possible to the back of the dock and lets it sink to the bottom before beginning a slow retrieve. Often the fish will be near the bottom. If he doesn’t catch one, the next retrieve is higher in the water column. The depth where crappie suspend under a dock can vary, so it’s necessary to experiment to find the fish.

To book a guided fishing trip with Tim Pentecost on Lake Weiss or Neely Henry lakes, visit his website, Facebook page or call 256-630-5042.

Although summer is not the most popular time of year to go crappie fishing it doesn't mean that you can't. If you are an early riser you can get out on the lake when the sun comes up and be back at the dock by the time it gets hot with a stringer of fish if you know where to look.

During the summer months with the surface temperature bouncing close to 90 degrees crappie will feed more in the early mornings. You'll find them on brush and stumps from 12 to 25 feet of water near creek and river ledges. You can cast to them with a light jig, spider rig with live minnows or you can set a slip bobber to suspend your bait just over the top of them. Usually you'll get a few takers pretty quick and then the bite will slow. You can either move on to the next spot or you can wait them out and usually the spooked fish will eventually move back.

If you want to learn about crappie fishing on Weiss Lake in the summer months, give me a call to book your trip for some great summer time fun! 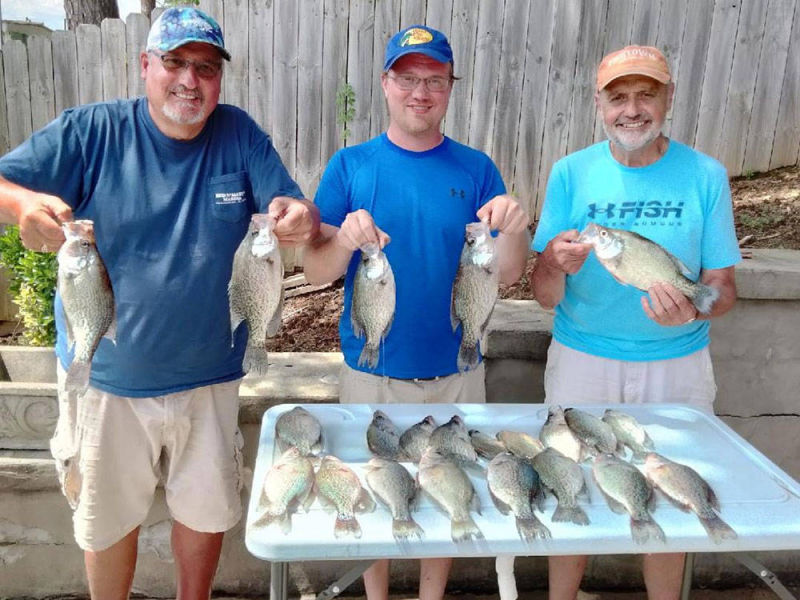 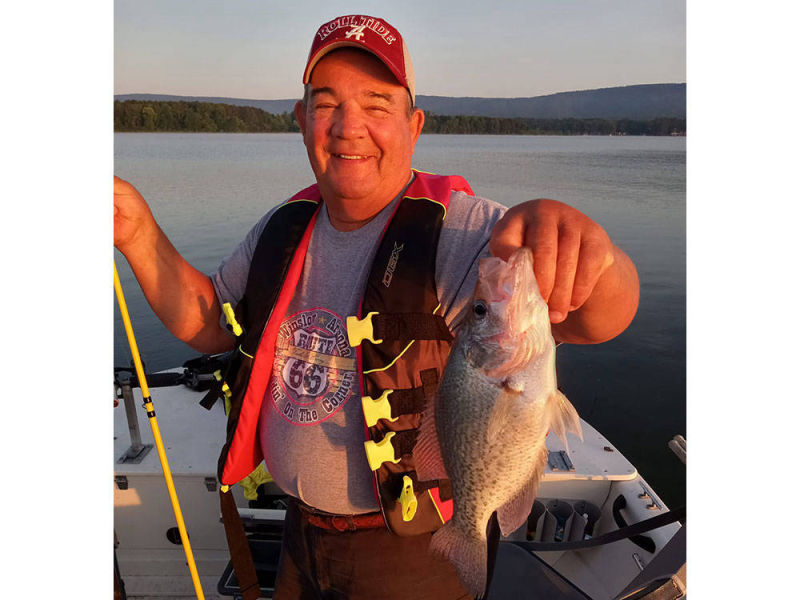 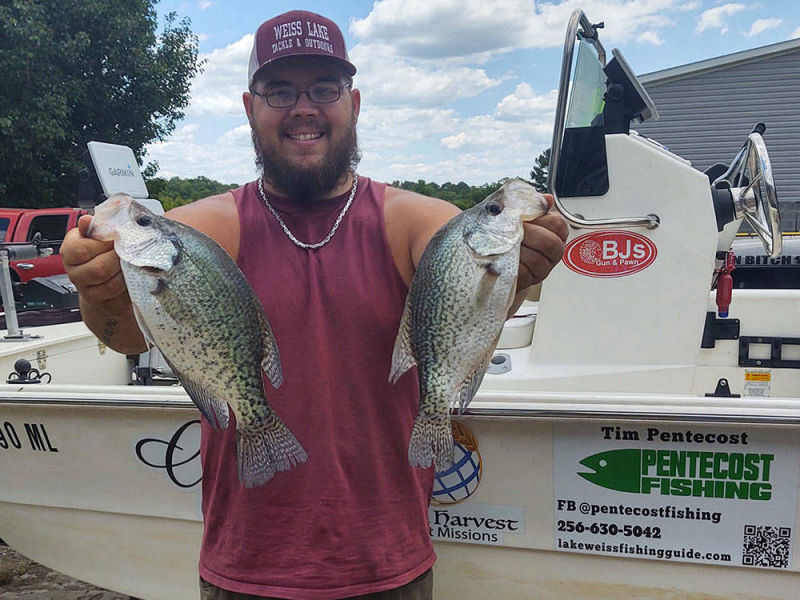 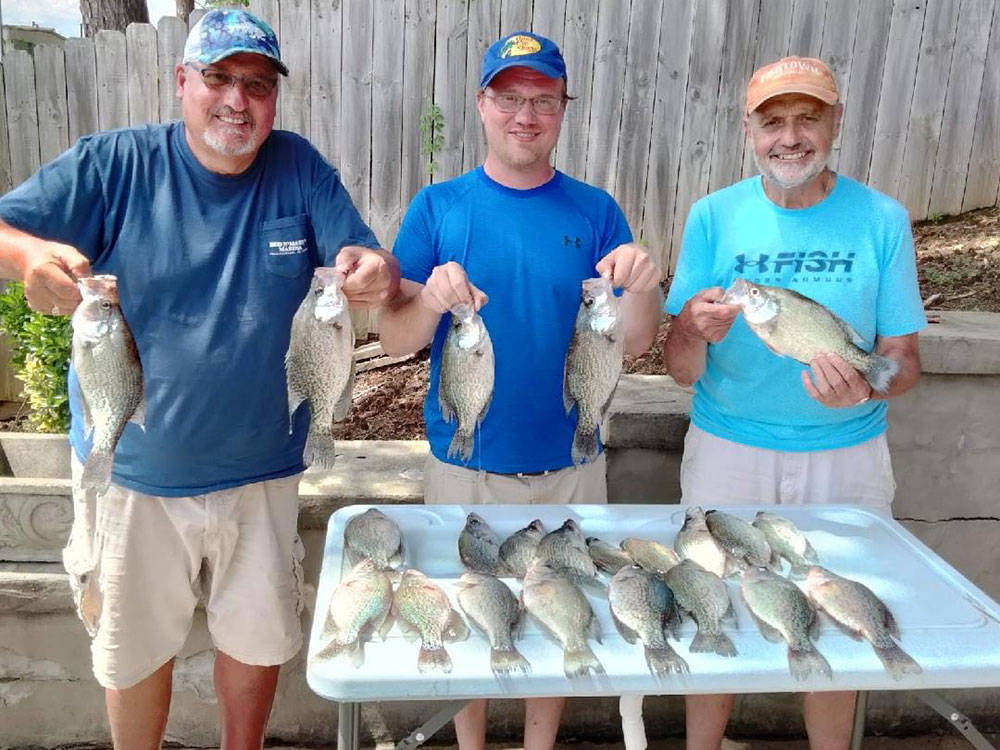 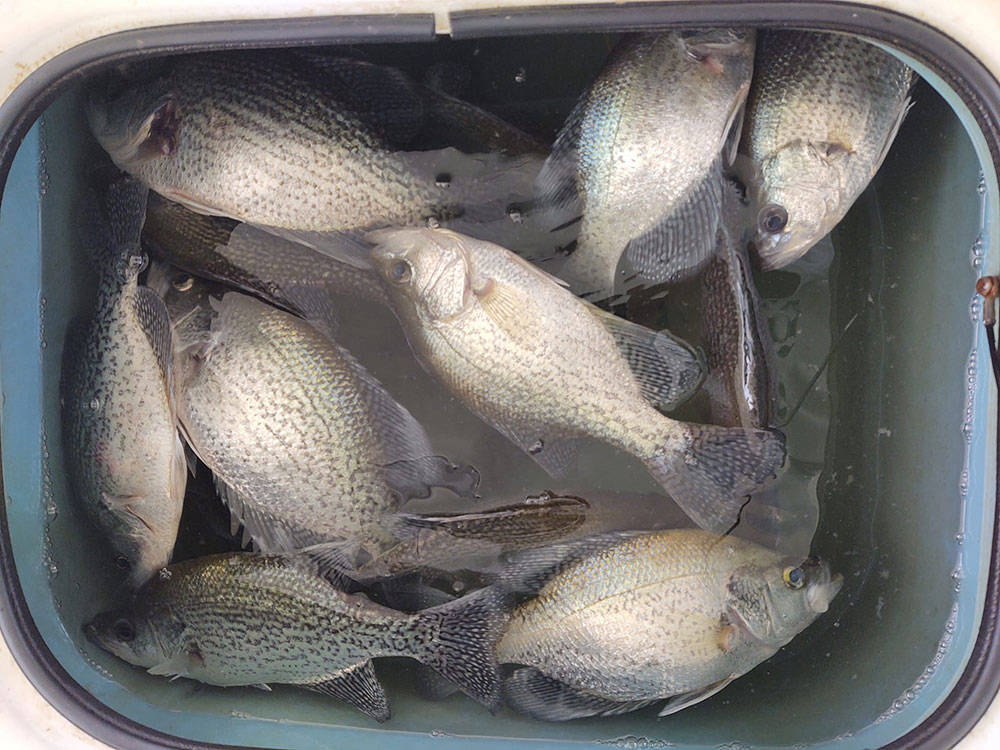 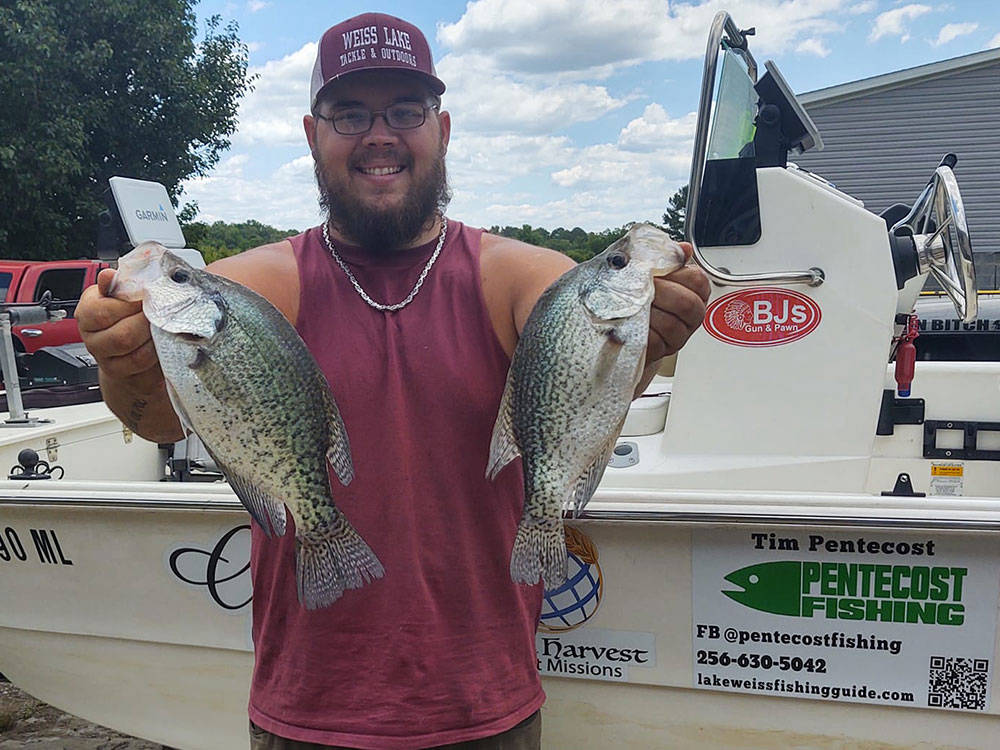